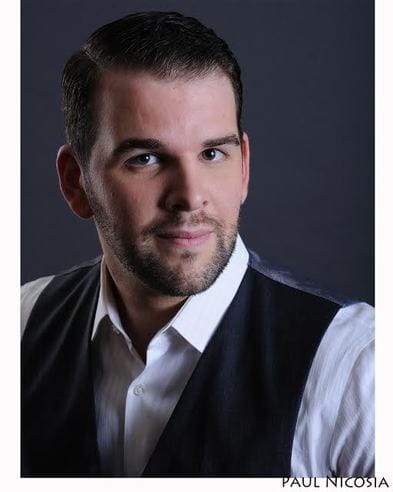 Paul Nicosia​, an American tenor praised for his “innate musicality” and “accessible vocal versatility and flexibility,” most recently appeared as Acis in Opera Theater of Montclair's production of Handel's Acis and Galatea. Last season, at Utah Festival Opera in 2015 where he covered the roles of Rodolfo in Puccini’s La bohème and Enoch Snow in Rodgers and Hammerstein’s Carousel. During the 2014-15 season, Paul finished his second year as a Resident Artist at Sarasota Opera. While there, he sang the Ufficiale in Rossini’s Il barbiere di Siviglia, Villager in Leoncavallo’s Pagliacci, and First Boyar in Rimsky-Korsakov’s Zolotoy petushok (The Golden Cockerel) while also covering the roles of Raymond in Verdi’s Jérusalem and Don Curzio in Mozart’s Le nozze di Figaro. Paul has also appeared on the stages of Arizona Opera as the Messenger in Verdi’s Il trovatore, at Opera New Jersey as Normanno in Donizetti’s Lucia di Lammermoor, and at Des Moines Metro Opera where he covered Howard Bucher in Jake Heggie’s Dead Man Walking.
In 2015-16 Paul returns to Arizona Opera to sing the role of Danny and cover the roles of Roy Dexter in the Arizona premiere of Emmerich Kálmán’s Arizona Lady and Don Ottavio in Mozart’s Don Giovanni, and debuts at the Arizona Bach Festival as the tenor soloist in the St John Passion.
Paul received his Bachelor’s degree from Rowan University where he was seen as Tamino in Mozart’s The Magic Flute, Count Tassilo in Kálmán’s Gräfin Mariza and Mayor Upfold in Britten’s Albert Herring. He completed his Master’s degree at Arizona State University where he played Don Ramiro in Rossini’s La cenerentola, Prologue in Britten’s Turn of the Screw, and Pirelli in Sondheim’s Sweeney Todd.
Paul’s musical interests also include concert works, which he has performed multiple times in the Phoenix metro area as well as the tri-state area of New York. His repertoire includes Handel’s Messiah, Mendelssohn’s Elijah and Mozart’s Mass in C Minor and Requiem Mass.